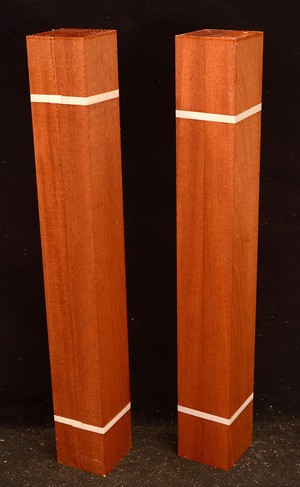 Also called Acajou, Tropical American Mahogany, and Honduras Mahogany. This medium to large tree occurs throughout Central and South America. Related to Cuban Mahogany (Swietenia mahogani) and Pacific Coast Mahogany (Swietenia humilis). It produces one of the classic furniture and cabinetmaking woods. The heartwood varies from a light reddish-brown to a rich, dark red. Generally straight grained and exceptionally stable, it is easy to machine, hand plane, sand and finish. Occasional logs produce several figures, curly, quilted, and the rare plum pudding figure which looks like large drips running down the board. Used in fine furniture and joinery, boat building, and in the guitar industry for acoustic sets and necks.

Due to CITES regulations, we can only ship this species to customers in the United States.

We're still operating and shipping orders every day. However, we are now closed to walk-in retail business at our warehouse in Portland OR. If you want to pick up an order in person, just give us a call. Thank you for your business in this tough time.