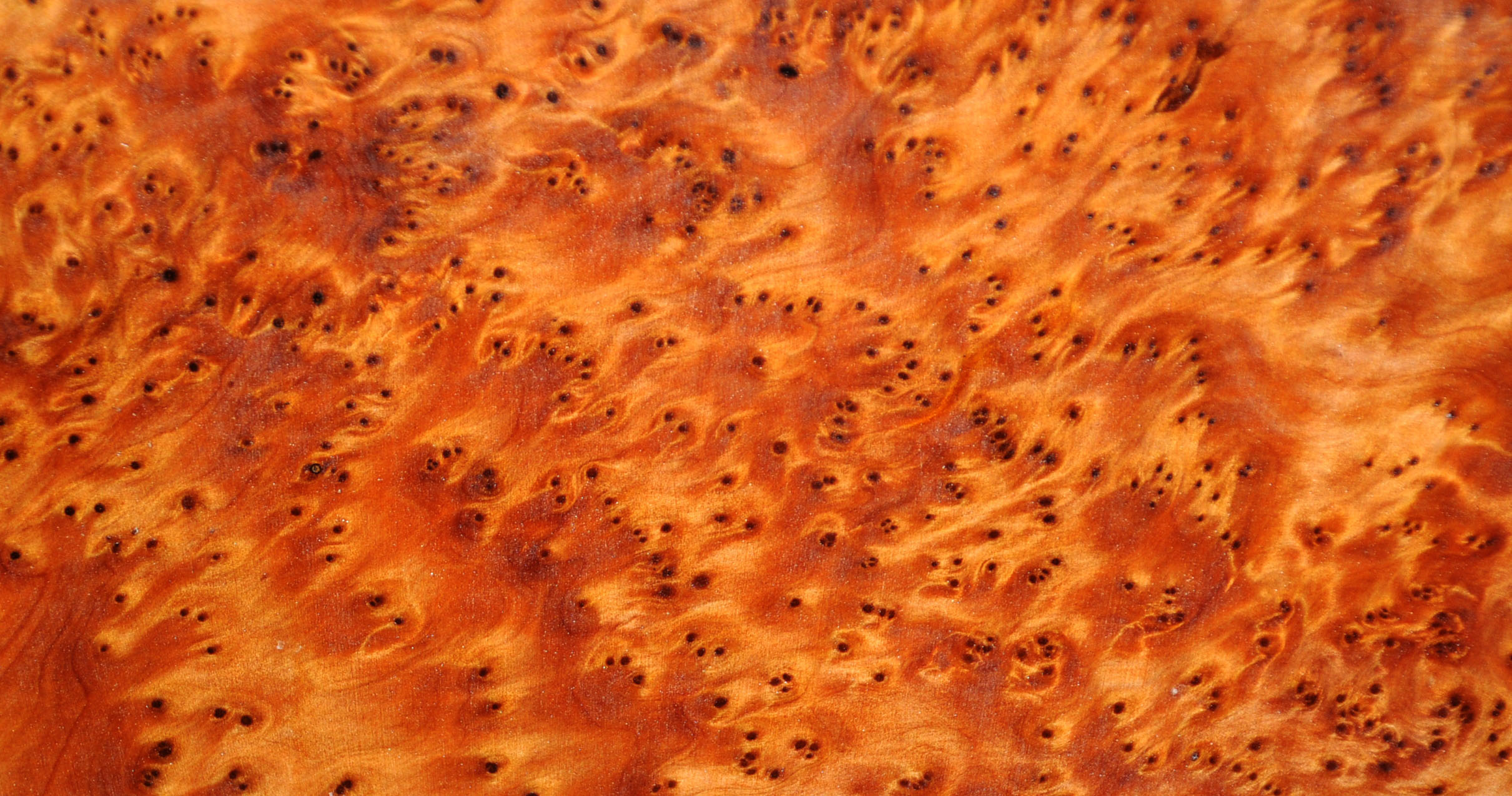 A close up of the many eyes of a Thuya Burl.

Used since the days of Solomon and David when it was called thyine wood, Thuya is one of the few woods mentioned in the Bible, referenced by John in the Book of Revelation. Popular during King David’s reign, it became a favorite among the cultural aristocracy. The Greeks named it Thuya, meaning sacrifice, because they used an oil distilled from it as incense in their religious ceremonies. Some churches still use it today. As sandarac oil, Tetraclinis articulata oil is valued for medicinal uses.

Thuya Burls are as beautiful as they are fragrant and the Greeks and Romans vied with each other over furniture made from them. The powerful men of those ancient times had two great ambitions: to be a dictator and to own what was a Thuya Burl table to a Greek, a citron burl or thyine wood table to a Roman. It is said that the wife of Cicero owned a thyine burl table costing the equivalent of fifty thousand dollars.

Thuya trees, along with cedars and oaks, once covered the Atlas Mountains of Algeria and Morocco, but because of over cutting, large areas have been treeless for hundreds of years. For centuries the native peoples started fires whenever they wanted to clear tracts of land. Such clearing caused great destruction, but paradoxically, also caused burls of beautiful character to form on the roots of burned Thuya trees.

Found in the Atlas Mountains and nowhere else on earth, finding these rare burls is no mean feat; never very large, and with hardly a stump to guide the searcher, a plow must be used to unearth them. Grubbed out, most of the burls find their way to Europe, mainly France.

The fact that Thuya Burl is grown underground makes it even trickier to import into the United States. Gilmer Wood Company owner Myles Gilmer gives this first hand account: There was a time when U.S. Customs was the only federal agency a timber merchant had to deal with, and I seldom had contact with an actual customs inspector. But then the bureaucrats got involved and the next thing I knew, the U.S. Dept. of Agriculture (USDA) had to inspect most shipments for the presence of insects or other life forms that might be injurious to American crops. Eventually, all importers had to have their shipments fumigated but in the beginning if live insects or foreign plant material were found in a container, they were removed and incinerated or the entire shipment was fumigated, usually with Methyl Bromide.

The first time I had anything inspected by an USDA agent was a shipment of ten tons of whole Thuya Burls from North Africa. Since Thuya Burls are dug up from the ground, they always have a plethora of dirt and rocks filling any and all crevices and root hollows. The agent informed me that all this non-woody material had to be removed from the burls, collected, and then sent off to a federally certified incinerator. I spent the better part of a week digging all the dirt and rocks from the burls using picks and rock chisels. This was all collected atop a plastic sheet, shoveled into plastic sacks and then carried off by an official USDA truck. Oh, and then I got a bill for the incineration of all the dirt and rocks.

Needless to say, Thuya Burl is a special wood. The Thuya tree is threatened due to overexploitation for fuel wood use. This makes the burls extremely scarce. Prices at GWC start at $10/lb, depending on size, figure, and amount of defects.

Thuya Burl is fairly firm and dense with a high oil content, but tends to be brittle. Its color varies from a rich, lustrous golden brown to nearly black. The eyes, perfectly round, are scattered about in some burls like the figure in bird’s-eye maple; in others they are grouped as islands. Thuya Burl is easily finished with wax or an oil and varnish mixture. Due to its oily nature, polyurethane finishes may remain tacky for some time. The oily wood can also clog finer abrasives when sanding. An exquisite wood, Thuya Burl is used for inlays, small boxes, turnery, knife & pistol handles, jewelry boxes, and precious objects. 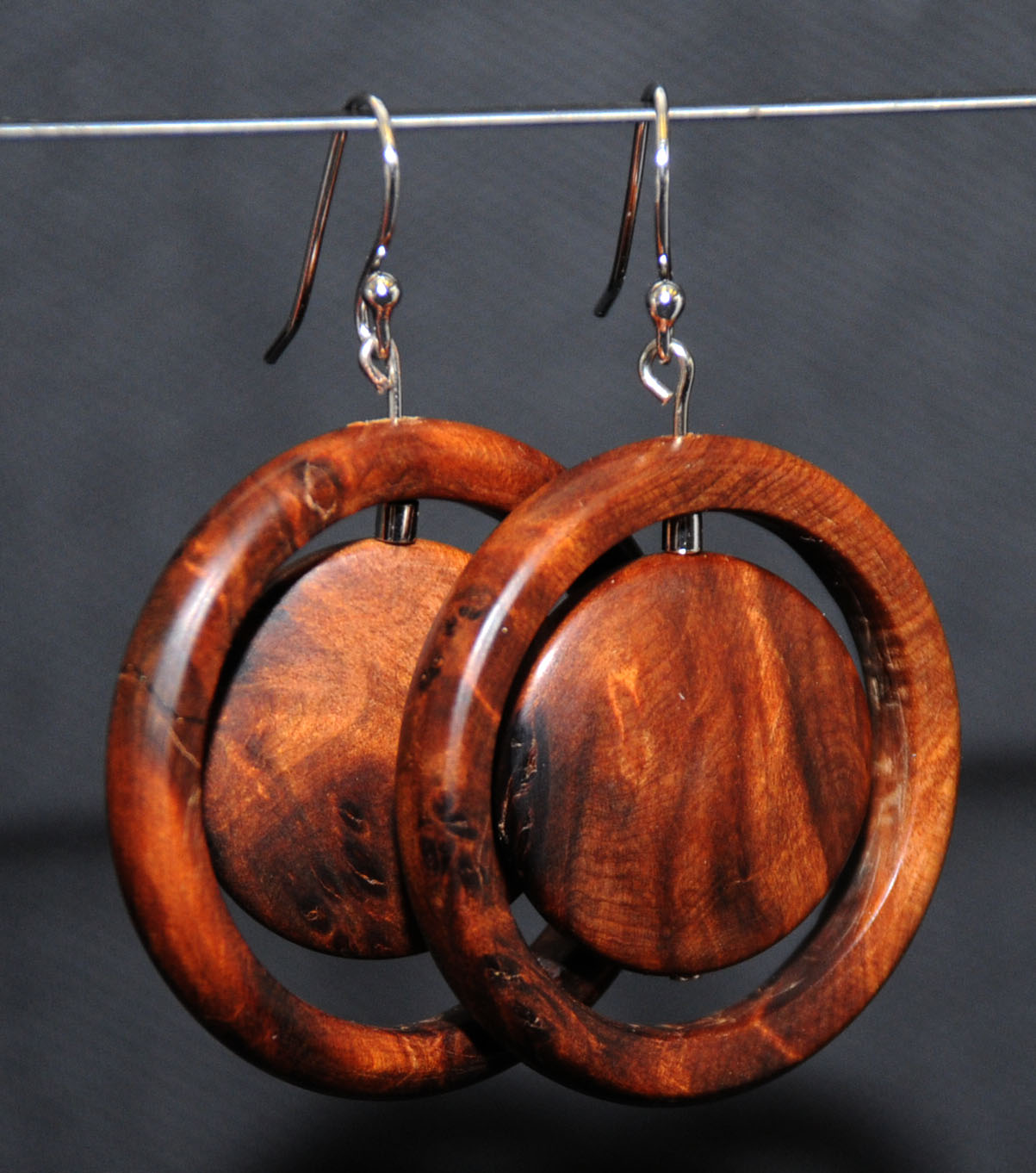